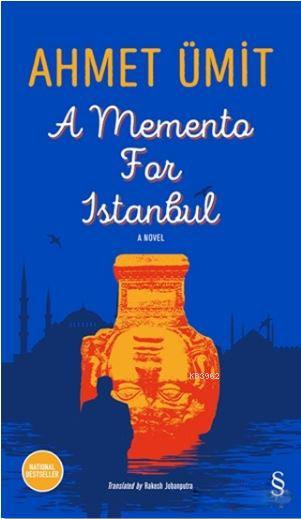 A Memento For İstanbul; A Novel

A thrilling tale which moves back and forth through time, from the early days of Byzantium to the thriving metropolis of Istanbul... A corpse is discovered at the base of the statue of Atatiirk in old Istanbul, an antique coin left in its hand... But it's not to be the last corpse and the bodies soon begin to pile up... And so the hunt for the killers begins... Seven murders, seven sovereigns, seven coins and seven ancient monuments, with one thread binding them all: the history of one of the world's most mysterious and most dazzling cities.

The sea was shrouded in a mist, our boat hidden from view. Istanbul was lost in the mist. Only the minarets of Sultanahmet Mosque, the dome of the Hagia Sophia and the turrets ofTopkapi Palace were visible above the haze. The city seemed unblemished and pure, unharmed and untouched, the white mist veiling anything and everything which could blight the view. It was like a vision from an ancient myth emerging for a fleeting moment before the light of the day... A newly founded city, a new start, shimmering in the grey light of dawn... Young, vibrant and full of hope...

We were looking at the city from the sea. At King Byzas' legendary country, at Constantine's imperial capital, at the stone necklace of the walls built by Theodosius II, at Justinian's peerless Hagia Sophia, at Topkapi Palace, from which Mehmed the Conqueror ruled over half the known world, at the Lawmakers stunning Siileymaniye Mosque... From out at sea we gazed upon those kings, those extraordinary generals and captains, at the nobility and the citizens of repute and bearing, at the slaves and the Sufis and the saints... At the women: Pulheira, Theodora andRoxelana... From our vantage point out at sea we looked back upon heroics, cowardice, creativity and destruction, at intelligence, foolhardiness, compassion and cruelty... From out at sea we gazed upon the whole of man's madness and mystery, at the entirety of his daring and his exploits.